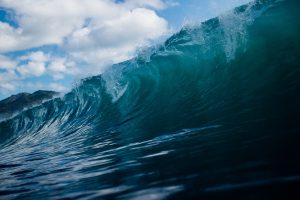 Some time ago, many people started seeing BIG WAVES in their dreams or in visions or receiving Big Wave prophetic words. There was a commonality in these experiences in that the waves seemed to be HUGE, IMMINENT and LIFE CHANGING, and that there was a preparing which could be done. A preparing of the heart seemed to be the most important thing. People, organisations, governments, companies and especially churches were about to have a ‘Brody Moment.’*

2020 COVID-19 has certainly been destructive for many people and sadly, hundreds of thousands of people around the world have passed away as a result of being infected.  Some have theorized about origins of the virus; how governments and authorities have used the ‘opportunity’ to increase their power; about the dangers of relinquishing our ‘freedoms,’ etc.  I am not addressing these ‘issues’ here.

Could it be that the BIG WAVE in these dreams, visions and prophetic words is/has been the experience we are now in? The big waves in these experiences could be seen as a social disruptor** Some negative aspects of disruption have been: Social distancing; Closures of churches and ministries; Closure of businesses; Unemployment; Shut down of large parts of the economy; Travel restrictions; Increase in mental health disorders; etc.

Some of the positive things which have come out of the recent disruption of social distancing and restrictions are: Increase in technological know-how. A spike in the uptake of online meeting software/ services such as ZOOM, Skype, MS Teams, etc. New opportunities have emerged for reaching people who have never been touched before by local organisations.

A large wave, or more rightly, a series of large waves have hit the world in the last three months. Some commentators are saying that the world will never be the same again, this could be true. Some of the big questions are now:

We now have an unprecedented opportunity to continue with disruption, not for change’s sake, but for the benefit and betterment of ourselves, the organisations we work in and other people. We need to commit to looking outside our normal parameters in order to see the problems we don’t see when we are looking at things through our normal lens. It is only then that we might see the answers which could bring us into new paradigms of success.

*Brody Moment – the moment where you realise your current direction will result in spectacular failure. Taken from the film Jaws (1975), where Chief Brody sees the shark up close for the first time. Brody backs into the cabin of the boat and says, “You’re going to need a bigger boat!”

**Social Disruptors – This term usually is usually applied to people and organisations that disrupt the existing state of affairs to create positive change. Here I apply it to an unprecedented and unforeseen situation which has given rise to a unique and far reaching opportunity for change.

We are sorry that this post was not useful for you!

We are a network of Christian Pentecostal ministers, working in churches and ministries throughout Australia. We celebrate the autonomy of the local church, the freedom to follow Jesus and unity within the body of Christ.